Microsoft has had five versions of its logo so far. The first one was introduced in 1975, while the current emblem was created in 2012.

In 1987 Scott Baker designed a new logo. The wordmark used Helvetica italic typeface with a distinctive slash between the “o” and “s” characters. According to the company, this feature was supposed to put an emphasis on the word “soft” and also to create the impression of motion and speed. This version of the emblem was nicknamed the “Pac-Man” logo, as the slash bore resemblance to Pac-Man.

The current version of the Microsoft logo was introduced at the end of summer 2012. According to the company representative, the new design reflected Microsoft’s shift from more classic interface to the tile-centric modern one. The wordmark featuring a new font was accompanied by an emblem consisting of four squares. Each square was supposed to represent one of the company’s main products (Windows, Xbox, Bing, and Office).

The first Microsoft Office logo was introduced in 1995. In addition to the wordmark, it featured a square shape with assembled puzzle pieces inside (four colors: yellow, red, green, and blue). It did not change much for the 1997 and 2000 Office versions.
In 2001, when the XP version was introduced, a gradient tool was applied to the logo. The four color puzzle was moved to the left, so that it appeared in front of the wordmark.
In 2003, instead of the puzzle pieces logo a new one appeared. It featured four interconnected squares of different colors and sizes. The 2007 and 2010 Office versions used variations of this symbol, while the 2012 emblem was completely different. It sported an abstract orange shape, which was supposed to reflect the company’s new design language.

Originally, the Microsoft Excel logo featured the letter “X” that had the “L” on one of its sides. So, the emblem could be read as “XL,” or, Excel. Although the logo went through about eight modifications from 1985 to 2013, each of the versions used the same visual effect. However, in the 2013 variation, the company switched to a simple “X” without any details.

Most old versions of the Microsoft Outlook logo, except the one released in 1995, featured a gold color palette. For the 2013 variation, however, a completely new color scheme was devised. It features the dark shade of blue for the emblem and a white background. Alternatively, the emblem can be white on the blue background.

The original Microsoft Word logo, which was introduced in 1983, was just a wordmark with a recognizable “O” character. Four years later, a new emblem was adopted. This was the first time when the “W” character became the central part of the logo. It was placed over the background depicting a sheet of paper. The logos that appeared over the following 13 years were variations of the same idea.
In 2000, a completely new emblem was introduced, depicting the “W” character inside a square shape. It was then that the iconic white-and-blue color scheme was adopted. The logo was modified several times, until in 2013 the company developed an emblem resembling an opened book with the letter “W” on its cover.

When in 2010 Microsoft introduced its Azure cloud computing service, it appeared with the company’s iconic four-part “flag” logo. The choice of color reflected the name of the platform. In two years a new emblem was developed, consisting of four trapezoids. Two more years later, the company removed the symbol, leaving just a wordmark logo.

In 2015, the Microsoft logo was refreshed, using the Segoe font instead of Helvetica Bold Italic. According to design experts, this choice reflects the company’s visual identity as well as the style of typography that is used in their operating systems.

There are six colors in the logo. In addition to the wordmark itself, which is grey, there is the emblem consisting of blue, yellow, green, and red. All these are given on the white background.

Third parties may only use the logo without a license under the following limited circumstances:

In advertising, marketing collateral, or a website that references your connection with Microsoft (e.g., the material states that you are an authorized distributor or reseller of Microsoft products) prov >Do not use the Microsoft corporate logo in products, product packaging, or other business services for which a formal license is required.

We have two versions of the full color logo. Choose the logo most appropriate for your application.

We respect the logo by giving it some space on all sides. The minimum clear space is equivalent to the height of the symbol.

Microsoft reserves the right in its sole discretion to terminate or modify permission to display the logo, and may request that third parties modify or delete any use of the logo that, in Microsoft’s sole judgment, does not comply with these guidelines or might otherwise impair Microsoft’s rights in the logo. Microsoft further reserves the right to object to unfair uses or misuses of its trademarks or other violations of applicable law. 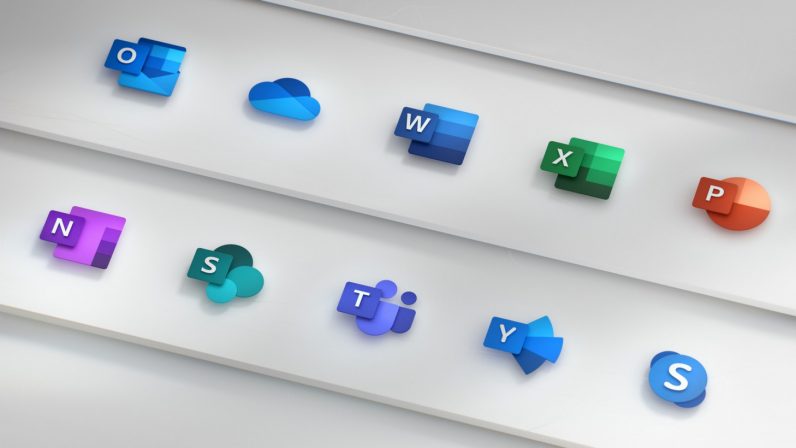 Microsoft was one of the pioneers of the current trend of flat design, but recently the company has been evolving its aesthetic into something a bit more three-dimensional. Last year, it unveiled its new approach, called Fluent design, adding depth, lighting, motion, and more to its aesthetic. Fluent has slowly been making its way into Windows, and now it’s hitting Microsoft Office in a big way. Say hello to the new Office logos:

Talk tech to me

If you ask me, that’s a big upgrade over the current suite:

And I don’t think it’s just a matter of newness, given some of the questionable and outright disastrous redesigns we’ve seen before.

In a Medium post by lead Office designer Jon Friedman, Microsoft notes that the world has changed a lot since 2013, the last time it redesigned its logos. Back then, selfies and emoji were new concepts, AI was only beginning to make its mark, and you were still more likely to save files locally than in the cloud.

The new logos reflect a more modern aesthetic, as well as the principals outlined in Fluent design. Notably, they are layered in a way that allows them to separate the letter and the accompanying symbol, adding a sense of depth “which sparks opportunities in 3D contexts.” The symbol is now larger than the letter because Microsoft wants to emphasize the content you create over the tool itself.

The new logos will make their way over to the apps in the coming months, but in the meantime, you can read Friedman wax philosophical on the new designs over at the blog post – or check out the embedded video. Better yet, the new ethos isn’t exclusive to Office. In a reply to a comment, Friedman notes “ this is the beginning of a cross-company effort to update all icons in the same style.” In a separate reply: “It is a huge undertaking to build a common system and design 10 icons at the same time. Now that we have established the system we will start to scale it across all of Microsoft.”

Bring it on, I say. Microsoft has tried to position itself as a company friendlier to artists and creative folk with its Surface hardware and various Windows 10 Updates, but its design has remained inconsistent over the years. Here’s hoping this is a sign times are changing.

Read our daily coverage on how the tech industry is responding to the coronavirus and subscribe to our weekly newsletter Coronavirus in Context.

For tips and tricks on working remotely, check out our Growth Quarters articles here or follow us on Twitter.